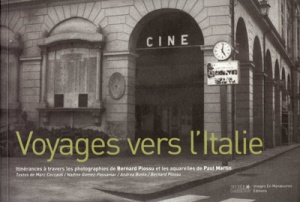 When Paul Martin started out on the paths of Haute Provence on 16 July 1872, like many artists of his time, he succumbed to the fashion of the picturesque voyage that had become common since the end of the 18th century. For these artists, it was a way to familiarise the public with the rich wealth of rural heritage, in the tradition of the filigree – Paul Martin was a friend of Mistral. The generations of the Romantic period were keenly interested in watercolour, which originated in England. With this rapid technique, it was possible to instantly grasp the glow of twilight. It corresponded to the romantic idea of the vagabond artist who took his energy from contact with nature. In two weeks, the watercolour artist Paul Martin reached the confines of the lower Alps area, touched the Italian border and came back. He left 56 instantaneous paintings, fugitive, nostalgic impressions of a slow journey towards Italy.

Bernard Plossu’s photographic journey in 2002 in the same lands of Haute Provence proposes a living, contemporary experience of the crossing of the Alps. Here, the journey to Italy is in a car. The landscape is experienced through the car windows, and he only got out of the vehicle on a few brief occasions. The crossing through the landscape is no longer an ode to slowness, but constructs an aesthetic of contrast: the gentle curves of alpine prairies are succeeded by the right angles of industrial constructions in the Po Valley.
Through Bernard Plossu’s photographic lens, the route to Italy becomes clear, stripped of all emotion. The photographer lets us share his experience: he presents us with his entire contact sheets, signifying his wish to show the lines of force of his voyage.

This book reflects a change between two ways of working, separated by more than a century and by an apparent incompatibility.
It also shows a present desire for exchanges on the subject of artistic output on each side of the border: following a European programme, today’s public is invited to experience the view along this route taken by Bernard Plossu in its own way. In the summer, a series of contemporary art exhibitions are placed along the route between Digne and Caraglio.