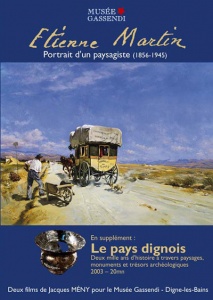 Publication in French / video DVD / Pal / stereo / total length 52 mins. These two films, on view in the rooms of the Musée Gassendi, are available for sale.

Who is Étienne Martin? His biography shows the image of a man whose life was organised around two centres of activity: painting, by which he earned his living throughout his life, with his involvement in the cultural and artistic life of Marseille, where he lived for a large part of the year; and the continuation of the work of his father Paul, as founder and promoter of the Digne museum. He was the museum’s curator from 1905 until his death in 1945. He sank all his fortune into this adventure.

Therefore he divided his life between Digne and Marseille, with stagecoach journeys that were the subject of many stories, impressions of journeys dotted with comments and colourful encounters. Born in the middle of the 19th century (1856) into a bourgeois circle very influenced by miserabilist ideology, he was also a ”man of letters” and, in his writings, we can see his personality, his tastes, his preferences and his disillusionments.

This film is both a journey in time and in the landscapes of Haute-Provence, an evocation of the traditional rural life of which Étienne Martin extols the humble simplicity.

Through his paintings and his writings, this artist, who was typical of his time and his social milieu, tells us of his personal journey marked by the regionalist preoccupations and the aspirations of Provençal thinkers at a turning point in their history.

The history of the Digne area, through the Musée Gassendi’s collections, landscapes, historic buildings and monuments, and archaeological treasures.