Volte-face. On the other side of science, the lessons of history – Fontcuberta

Home / Home / Shop of the Musée Gassendi and the CAIRN Art Center / Publishing / Arts / Volte-face. On the other side of science, the lessons of history – Fontcuberta 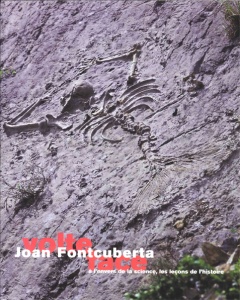 Volte-face. À l’envers de la science, les leçons de l’histoire
[Volte-face. On the other side of science, the lessons of history]
Joan Fontcuberta

Catalogue of the exhibition by Joan Fontcuberta, Les sirènes de Digne, 2000.
The artist took inspiration from the discoveries of specimens of fossilized species in the Haute-Provence geological reserve, such as the sirenians in Castellane or the Ichtyosauri in the Digne area, and also probably from a late 20th century scandal concerning a fossil, archaeoraptor liaoningensis, forged by Chinese farmers and representing a kind of missing link between the dinosaur and the bird, a discovery celebrated by the National Geographic Society. Working in certain rock formations in the Digne area, he shaped fallen blocks which contained a fake fossil of three specimens of “fish-men” that he called hydropithecus. These specimens were durably inset in the stone and protected against damage by time, the natural elements and people.

The first part of the catalogue is devoted to correspondence between the person who discovered these specimens, Jean Fontana, a seminary student and director of the Physics and Natural History Department of the Petit Séminaire in Digne, and his illustrious mentor, Albert Félix de Lapparent, the eminent geologist, who replaced Teilhard de Chardin as Chair of Geology at the Institut Catholique after Teilhard had been suddenly sent to China by his superiors because of his rather unorthodox scientific standpoints. This correspondence relates quite precisely the sequence of events after the discovery of the hydropithecus specimens. It also clearly shows the worrying direction (at least in the eyes of the religious authorities) taken by the progressive conclusions of Fontana, who did not listen to Lapparent’s exhortations to exercise more scientific restraint and to temporarily suspend his desire to submit a dissertation on this case. In his reservations and warnings, Father Lapparent even refers to the case of the manipulated remains of Piltdown Man, a missing link that authenticated Darwin’s theories, which was “discovered” in Sussex in 1911 – a hoax that he suspects Teilhard de Chardin to have devised. The correspondence ends with the downfall of Fontana, whom the religious authorities ordered to put an end to his research.

In addition to this correspondence, there are images of Father Fontana, taken at the Petit Séminaire and during research work on the ground, as well as sketches of the hydropithecus. Then there is a mainly photographic report by National Geologic in Digne after the Réserve Géologique de Haute-Provence at last decided to excavate these specimens and to exhibit them in public.

Here, we can recognize Joan Fontcuberta’s own specific way of composing a fictional construction with the aid of photography that authenticates everything, together with references to real events or people (such Piltdown Man and Teilhard de Chardin) or against a real background (archaeoraptor liaoningensis), to give even more weight and credibility to his cleverly devised wild imaginings. All that remained was to create a priest who looked strangely like himself, and there you have it!

However, the catalogue does not consist in only this one production. It also contains texts by other authors who complement the artist’s hoax with their thoughts on sirens and on “fantasization” – and quite tendentiously, but with less success than the late Père Alberch had with Fauna secreta. Then there is also a list of the artist’s other “forgeries”. It includes images and texts from previous projects: Herbarium, Fauna, Safari, Retseh-cor, Constellations, Spoutnik, Aérolithes, and L’artiste et la photographie.