What are the connections between Zen or Tibetan Buddhism and the artistic avant-gardes of the XXth century in the West? This exhibition attempts to answer this question by drawing a parallel between works of art by modern and contemporary artists and archival objects from the Alexandra David-Neel collection.

Alexandra David-Neel explored the East on horseback between the 19th and 20th century, she was also an orientalist and an outstanding writer: her collection is serve as a reference to get acquainted with Buddhist culture.

In resonance with Buddhist philosophies, the works on display reach out, in a similar spirit, through coincidences and crossings of experiences, to a state of detachment and the road to emptiness. The mountain becomes the peak of this spiritual crossing, a symbol made sacred by the beliefs and representations of human societies.

SACRÉES, MONTAGNES SACRÉES, is an exhibition that is meant to be discovered from the Opening on March 29, with the presence of the curator. The performance by Richard Piegza Perpetuum mobile will liven up the evening.

On this basis it gains the benefit of a financial support from the State. 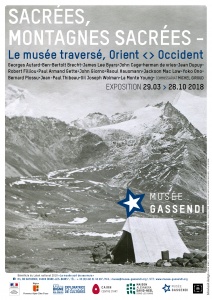