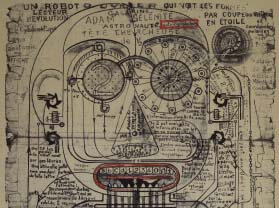 The incredible inventions of Jean Perdrizet (1907-1975) presented in this showcase are some examples of a large collection of plans, documents and carnets of this “inventor” – as he called himself – born in Digne. This collections has been donated by Mr Jean-Jacques Viton and the Centre de Recherche et Etude de l’Expression des Alpes de Haute-Provence association to the Musée Gassendi in 2012.

Since then, several exhibitions have been devoted to this abundant work, of which the inventions are now considered to belong more to the field of art (Art Brut) than to scientific research.

However, Jean Perdrizet’s name is not recorded in the history of 20th century science. Nevertheless, this highway engineering technical assistant, born in 1907, who had to stop working very early because of his mental problems, fascinated all the scientific dreamers who knew of him or met him. The drawings of his inventions, which he sent to the highest scientific authorities such as NASA, the CNRS and the Nobel Committee, are invitations to reconsider the boundaries of physics, which give us the codes for access to another world.

To allow visitors to explore Jean Perdrizet’s work through a multidisciplinary approach, an educational pack and works of art are available on loan, free of charge. Contact us for further information.