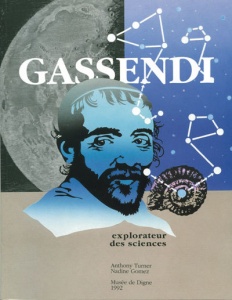 Gassendi, explorer of sciences, a book published on the occasion of the exhibition in the Musée Gassendi, from 19 May to 18 October 1992, to celebrate the fourth centenary of the birth of Pierre Gassendi.

“The renown of things is like the twilight: after being initially very luminous, it gradually fades to the point where it finally disappears into the shadows, and there is a need for history which acts as a torch that sheds light on it.”

Pierre Gassendi’s reputation complies with the scenario that he presented in the dedication of his book on Peiresc (Lassalle 21). Gassendi was among the most famous scientist in Europe at the end of his life. Despite the strong influence that he had exerted on an entire generation of scientists in France, Italy and England, he was soon forgotten. Gassendi was a humanist and scholar, but perhaps he used the French language with hesitation, since his native language was Provençal, and so he wrote all his work in Latin. In so doing, he ensured that he could be read by all of Europe’s scientists during his lifetime. But his generation was virtually the last to express itself naturally in Latin. If Bernier, his student and disciple, felt the need to summary Gassendi’s work in French, it was for a reason. The decline of Gassendi’s reputation started with the disappearance of Latin as the normal language of Europe’s thinkers.

But this decline was perhaps also due to the fact that 18th century Europe no longer needed Gassendi or his lessons. No longer, because the reflex of observing things systematically, the relentless empiricism that Gassendi showed to the scientists of his time, had by then become established in normal practice; no longer, because the atomist and mechanistic approach to the study of nature had by then become incorporated in the minds of researchers and philosophers; no longer, because Newtonian synthesis was in the process of triumphing over all other systems of syncretic and universal philosophy. In addition, Gassendi was difficult to read. In 1765, Dreux du Radier asked the question: “But why has Gassendi’s philosophy, which was admired by the whole world, made so little impact? One must blame his overly wide-ranging literature, which placed excessively long intervals between his reasonings, & and which dissipated its force & concealed its coherence.”

As the years passed, Gassendi’s admonitions became less and less useful, and his philosophy became more and more out of fashion. Even in astronomy, a field in which Gassendi worked the most and with the most results, his observations only had historical interest after the revolution created in observational astronomy by the application of powerful telescopes around 1670. In 1709, Flamsteed estimated that the positions of the planets derived from Gassendi’s observations “are scarce to be depended upon, because taken only with a forestaff” (Bailly, 273).

Gassendi was not completely forgotten in the 18th and 19th centuries. In his region, he was still remembered, but it was just a reputation: Gassendi was not read, and his works were no longer used. He was a historical figure in front of whom one had to bow, but not stop. It was 20th century scholars, and particularly historians of ideas, who rediscovered the value of his work for the development of European thinking. However, despite the fine studies by Pierre Humbert, the strictly “scientific” aspect (in the modern sense of the term) remained a little unknown. For this reason, and with the conviction that Gassendi’s activities can still teach us a lot about the investigation of nature in the 17th century, this exhibition was focussed on Gassendi’s works concerning what we now call “sciences”. But we did not wish to be too limited. Therefore we have tried to present these investigations as part of the life of the man and his ideas.

In the exhibition, we have tried to present a copy of each of Gassendi’s major publications and to describe it in detail. The collations of texts presented are based mostly on the examination of at least three copies of the book concerned. If therefore the exhibition seems a little too “bookish”, we have no regrets: “It was appropriate to present the history, the analysis & the subject of his books: the true story of a scientist is that of his books”, and we are of the opinion of Bougerel (sig aviir). At the same time, despite the risk of unbalancing the exhibition, we have decided to study Gassendi’s portraits in detail. This study forms the last part of the exhibition, but there we have not hesitated to refer to portraits represented only by photographic copies – or even not represented at all – in the exhibition.